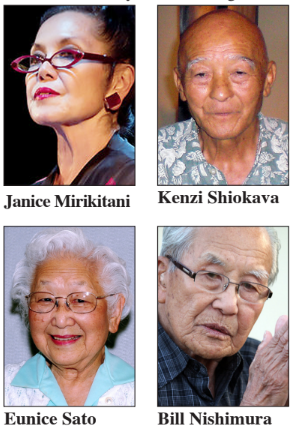 Here are some of the notable people who have died in the past year, in alphabetical order. The Rafu Shimpo expresses its sincere condolences to all who suffered losses in 2021. Our hearts are with you.

Jacqueline Before, 81, on December 1. A philanthropist known for her support of art and the Japanese community in Southern California. Wife of Music Director Clarence Avant.

Wilma chan, 72, on November 3. Member of the Alameda County Board of Directors and former Oakland representative in the State Assembly.

Sonny chiba, 82, August 19. The actor has wowed action movie fans around the world with his karate and other martial arts techniques.

Jeff Folick, 73, on August 19. A healthcare executive and active leader of the Japanese-American community, he has served as president of the Orange County Buddhist Church and a board member for Nisei Week, Keiro, and JACCC.

Jack Fujimoto, 93, on November 26. Long-time administrator at California community colleges, promoter of Japanese language education, and author of a book on Sawtelle Japantown.

Mary Matsuda Gruenewald, 96 years old, on February 11. A health care professional, activist, speaker, and author, she was revered by many on Vashon Island, Washington.

Al harrington, 85, September 21. He played Detective Ben Kokua in the original “Hawaii Five-0” and had a recurring role in the reboot.

Susana Higuchi, 73, on December 8. Ex-wife of former Peruvian President Alberto Fujimori, she became an opposition MP after the divorce.

Satoshi “Fiber” Hirayama, 91, September 15. A baseball and football star in Fresno State, he played for the Hiroshima Carp in the Japan Central League and was a two-time All-Star.

Alvin ing, 89, July 31. Pioneer Asian American actor and singer and advocate for AAPI in the arts. Her credits include the original “Flower Drum Song” on Broadway.

Lloyd Inui, 91, September 28. He helped establish the Asian and Asian American Studies program at Cal State Long Beach and served as an expert advisor to the Japanese American National Museum.

Ken iwagaki, 95, July 4. Founding member of the Japanese American Museum of San Jose and leader of other organizations in San Jose Japantown.

maki kaji, 69, on August 10. The creator of the popular Sudoku number puzzle whose lifelong job was to spread the joy of puzzles.

Sayaka Kanda, 35, on December 18. A popular singer like her mother, Seiko Matsuda, she was known for voicing Anna in the Japanese dub for Disney’s “Frozen”.

Lillian Sakaye Kimura, 79, on February 17. She was the Associate Executive Director of the YWCA and the first woman to be elected National President of JACL.

Taky kimura, 96 years old, January 7. One of Bruce Lee’s best students and closest friends, he was a renowned martial arts instructor in Seattle and appeared in several movies and TV shows.

Corky lee, 73, on January 27. A New York-based photojournalist, he has covered topics ranging from the Asian American Movement of the 1970s to the attacks of September 11, 2001.

Harry down, 90, on December 9. First Asian American judge in San Francisco, judge of the California Court of Appeals and 38th California Insurance Commissioner.

Gary Miyatake, 69 years old, December 29, 2020. Third generation photographer to the famous Miyatake family, he created Toyo Photography in Gardena. His portrait of Cesar Chavez was acquired by the Smithsonian.

Roy Murotsune, 95, May 28. He ran a gas station in San Jose Japantown before and after WWII. His family then established Roy’s Station, a cafe, on the site.

Wataru namba, 94, on June 26. American-Japanese survivor of Hiroshima, he shared his experiences in order to educate the public on the realities of nuclear weapons.

Bill nishimura, 101, October 19. Considered a troublemaker for defending the rights of Japanese Americans during World War II, he was interned in Tule Lake, Santa Fe and Crystal City.

Keizo Norimoto, 88, February 27. A Buddhist minister in Los Angeles and Fresno, and an author and columnist for Rafou and other newspapers under the pseudonym Ippei Nomoto.

Chiyomi Ogawa, 97, on June 16. She was featured in an exhibit and film about the wedding dress she wore in Manzanar, which was worn by five other brides. The story of the dress was also the story of JA’s incarceration and relocation.

Sally osaki, 88, on January 30. The first American woman of Japanese descent to work in politics and government in San Francisco, she was on the staff of mayors Dianne Feinstein and Art Agnos.

Robert rusky, 78, on November 22. He and his wife Karen Kai, both lawyers, were part of the legal team that successfully reopened Fred Korematsu’s WWII case in the Supreme Court.

Jakucho setouchi, 99, November 9. A Buddhist nun and one of Japan’s best-known authors, famous for her novels depicting passionate women and her translation of the “Tale of Genji” into the modern language.

Paul Kunio Shiba, 92, July 26. A leader of many community organizations in Southern California, he was awarded the Order of the Rising Sun, Gold and Silver Rays, for improving Japanese language education in the United States.

Kenzi Shiokava, 82, on June 18. Renowned sculptor from Brazil who moved to Los Angeles, he was featured in “Transpacific Borderlands: The Art of Japanese Diaspora in Lima, Los Angeles, Mexico City, and SÃ£o Paulo” at JANM.

Sunao Tsuboi, 96, October 24. A Hiroshima survivor who made opposition to nuclear weapons the message of his life, especially during a meeting with President Obama.

Holly yasui, 67, on October 31. Daughter of civil rights hero Minoru Yasui, she has been a tireless advocate for preserving the memory of her father’s historic case before the Supreme Court.