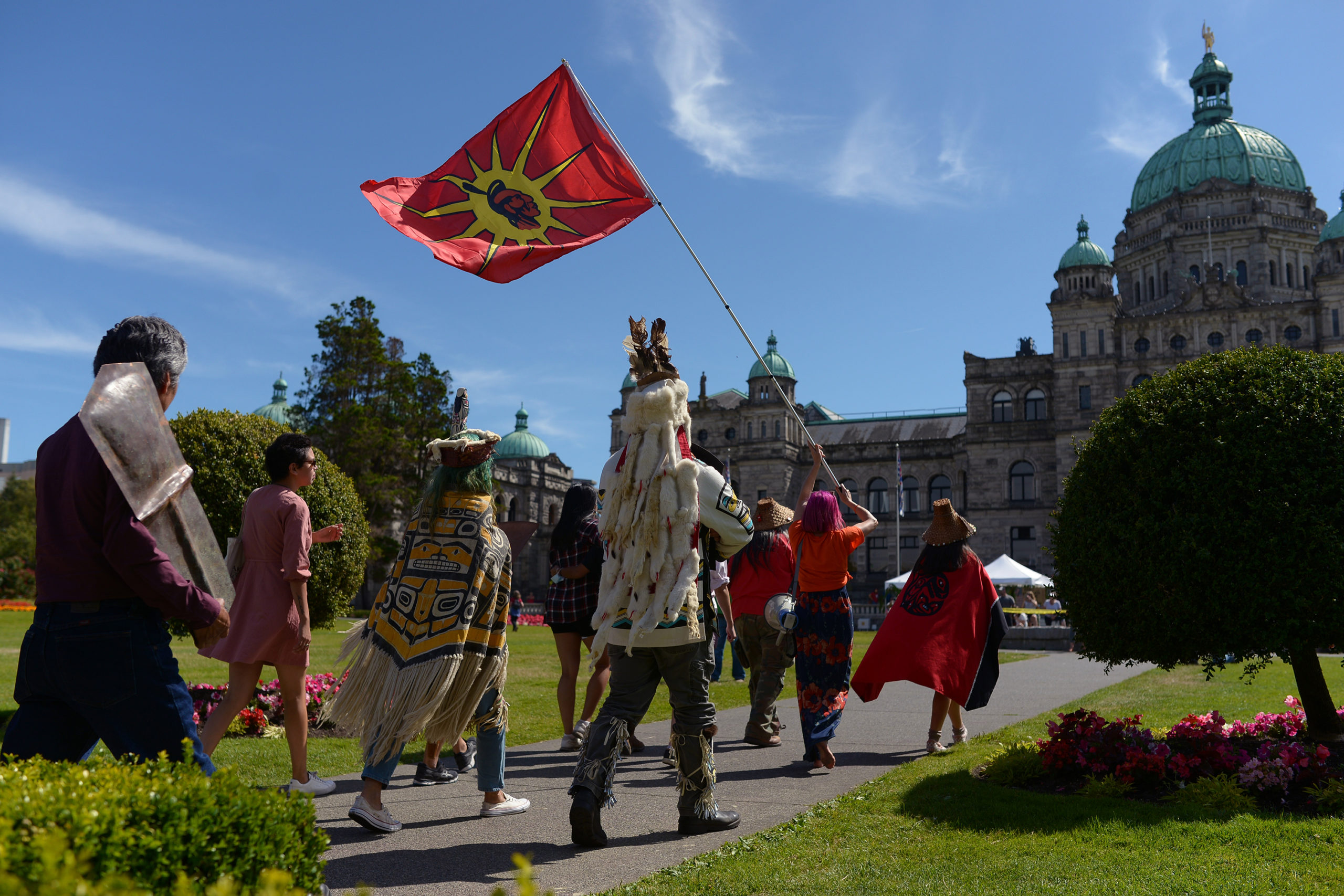 The demonstration marks one year at Fairy Creek – The Discourse.

Monday August 9 was of great significance to the hundreds of people who marched through the Parliament Buildings of British Columbia that day. They gathered in Lekwungen territory for Voices from the Ancestral Forest Frontlines, a protest marking the first anniversary of the Ada’itsx / Fairy Creek blockades and also the International Day of the World’s Indigenous Peoples.

But the day was important for another reason as well. That morning, the RCMP entered three blockade camps in Fairy Creek and began arresting those present. It was the first police raid on the group’s headquarters. In total, the RCMP reported 33 arrests on Monday and 556 since the start of the blockades, located in the territories of Pacheedaht and Ditidaht.

“It was meant to be a day to celebrate being indigenous and for indigenous people to stay united,” Rose Henry, one of the leaders of Monday’s event, told The Discourse. “And the rest of the world is celebrating. What did we wake up to? Lowering. Welcome to Canada, let’s put on some bracelets.

Henry, also known as Grandmother Losah, is an activist and educator of the Tla’amin Nation. On Monday, she helped lead the procession from the Provincial Courthouse on Blanchard Street to the Legislative Buildings of British Columbia.

“We’re not leaving, that’s the main message,” Henry said. “We don’t leave Fairy Creek before [forestry company] Teal Jones packs his bags and walks away, and until John Horgan gets up and says enough is enough.

Flanked by police, the demonstrators marched, sang and danced. They filled the streets of downtown, stopping traffic.

Indigenous peoples representing the Coast Salish Nations, Nuu-Chah-Nulth and Kwakwakaʼwakw, among others, attended. Many non-Indigenous allies also marched in solidarity.

Neegonwewedon, an indigenous land defender whose name means ‘thunder before the storm,’ told The Discourse that he felt compelled to leave the dams that morning, swimming across a river to escape the storm. police. When asked what prompted him to leave, Neegonwewedon replied that it was not sure.

“It’s a very violent place for the native people over there right now. He said police appeared to be targeting indigenous peoples and people of color, which other observers also say have witnessed.

Neegonwewedon said he witnessed a broken ankle and other injuries that morning as a result of the police actions.

After passing through downtown, the protesters arrived at the Legislative Buildings of British Columbia where crowds of supporters and witnesses were waiting. Cultural and hereditary leaders spoke, and many traditional songs were sung, while dancers danced on the steps of the building.

Those who took the microphone spoke with determination and conviction. Police were present, walking quietly through the crowd and watching from the perimeter and balconies.

Some protesters who had previously been stopped at roadblocks were present and spoke candidly about their experiences.

Kwakiulth hereditary chief David Mungo Knox watched the crowd as he held a copperplate to his chest, a valuable item that contains the history of his people and ancestors. It also represents a time before colonization, when they were free to gather for the potlatch, speak their language and dance.

“Without [the ancestors] sacrifice, what they went through, what trials, more than 100 years repressed, so that we are not asked to be able to speak our language. Singing our songs, dancing our dances, bearing our names is everything in life for us. That’s why I pack my copper, I squeeze it so tight. Because these are our roots.

Raising the copper of his family, Knox called on all nations of Canada to unite and work together in the fight to save ancient forests and the wildlife in and around them.

“We are one,” he said, thanking supporters for giving them a voice.

Bill Jones, a Pacheedaht elder who continues to welcome blockers into his territories, in defiance of the Pacheedaht leaders who have repeatedly called on the protesters to leave, spoke directly to BC Premier John Horgan, during a speech.

“You raise your hand and say you [John Horgan] are forgiven for what you have failed. But you also have a chance with us now, to reach out to us and share your grief knowing that you have, indeed, failed in your wishes for us. And you broke your promises.

“And now we are still here to implore you to say that yes we will save all these [trees, which are] our great-grandmothers, ”Jones said.

All photos from Philip McLachlan / The Discourse

Singapore catches up with Taiwan as chip investment skyrockets