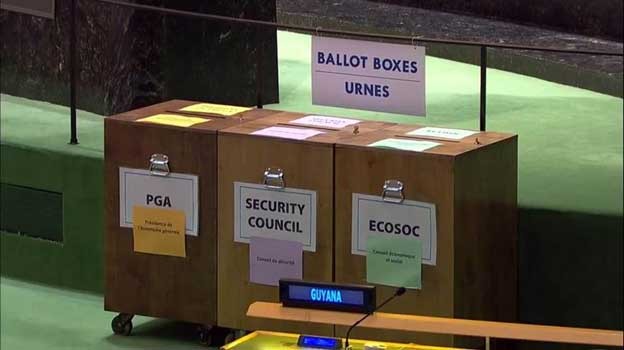 A 2.0 version of an ancient biblical saying reads: It is easier for a camel to pass through the eye of a needle than for a woman to become Secretary-General of the United Nations.

The ratio of men to women for the Secretary General is 9 to zero. And the Presidency of the General Assembly (PGA), the UN’s highest decision-making body, is not far behind either.

“Out of its 193 member states, only four women have been elected as the Speaker of the Assembly,” Ambassador Anwarul K. Chowdhury, Bangladesh’s former permanent representative to the UN, told IPS.

The score stands at 73 men and 4 women as PGA – even as the General Assembly elected another male candidate, as 77th president last month, who will serve his one-year term from from September 2022.

Since 1945, the only four women elected presidents have been: Vijaya Lakshmi Pandit of India (1953), Angie Brooks of Liberia (1969), Sheikha Haya Rashed Al-Khalifa of Bahrain (2006) and Maria Fernando Espinosa Garces of Ecuador (2018) .

Last month, the General Assembly adopted a resolution – by consensus – to commemorate every June 24 the “International Day of Women in Diplomacy” (IDWD).

But what is the significance of this resolution? And will it help usher in the UN’s first female SG or spark more female PGAs? Or is this resolution another exercise in political futility?

Introducing the resolution, Maldives Ambassador Thilmeeza Hussain stressed that “the participation of women in decision-making is absolutely vital”.

She also added that all too often, as women rise through the diplomatic ranks, they outnumber their male counterparts, including at United Nations Headquarters, where they make up only a fifth of permanent representatives.

Currently, there are only 44 women permanent representatives against 149 men in this position.

A former UN diplomat told IPS that PGAs are among the strongest advocates for women’s empowerment – ​​while in office.

But none of them, he pointed out, were politically generous enough to decline their nominations and convince their respective governments to nominate a woman for the post.

Meanwhile, in a letter to the President of the International Association of Permanent Representatives (IAPR), Ambassador Chowdhury said: “I remember with pride that in September 2012, I and IMPACT Leadership 21, launched a joint “call to action” to world leaders gathered at the UN calling for urgent action in four areas:

1. Appointment of a woman as the next UN Secretary General. In its 77 years of existence, the world body has failed miserably to elect a woman to this position. It’s really a shame.

2. Appointments of women as future presidents of the General Assembly. Of its 193 member states, only four women have been elected to the presidency of the Assembly.

4. Appointment by More Women Member States as Ambassadors to the UN in New York and Geneva.

On the first International Women in Diplomacy Day, he said last month, “let us commit to these goals to make respecting IDWD truly meaningful and worthwhile.”

“Reflecting the unfortunate reality, little attention has been given to these so far,” said Ambassador Chowdhury, former Senior Special Advisor to the President of the UN General Assembly (2011-2012).

Purnima Mane, former United Nations Under-Secretary-General (ASG) and Deputy Executive Director of the United Nations Population Fund (UNFPA), told IPS that a United Nations General Assembly (UNGA) resolution that recognizing the contribution of women globally in any sector is always a major milestone and to be applauded especially when adopted unanimously by consensus by the UNGA.

That the Maldives which proposed the resolution has 191 co-sponsors is commendable and is apparently a record for the current session of the UNGA, she pointed out.

“While this recognition of women in diplomacy is most welcome, many will question the timing of this recognition, especially as the UN grapples with a multiplicity of crises on the global stage.”

Obviously, the world will have to unpack what exactly this celebration of women in diplomacy means and what the ambitious goals are in the current scenario of the many challenges facing the UN and in the context of UN reform, said Mane, an internationally respected expert on sexual and reproductive health who also served as president and CEO of Pathfinder International.

She said the language used to explain this celebration indicates that it is about celebrating women at all levels of decision-making who work for the achievement of sustainable development, peace and democracy.

“Women are currently underrepresented at most levels among national delegations and in the UN diplomatic corps, but especially at higher levels,” she said.

While the representation of female ambassadors is said to have increased from 16% to 22% since 2018, the numbers are appallingly low to begin with and women continue to be vastly underrepresented in diplomatic positions in most countries.

Canada and Sweden, she pointed out, have achieved equal representation in the diplomatic corps and according to available records, the United Kingdom, Norway and South Africa are not far behind, but there is a lot of catching up to do for most countries.

To that extent, this commemoration could inspire countries to take the issue of women’s representation in diplomatic roles more seriously and also focus on providing an enabling environment in which to work, an issue in which important shortcomings are known, she said. .

Ambassador Chowdhury said the round of applause that followed the adoption of the resolution proclaiming the annual observance of this very significant day in the UN calendar was very energizing given the priority given to the overall objective to ensure “the active participation of women, on an equal footing on good terms with men, at all levels of decision-making…”.

Given its energy and relevance as well as the high-level support from the highest echelons of the United Nations, he said, it is very disappointing to accept the inclusion of a phrase in the same resolution emphasizing that the cost of all United Nations activities that may arise from the observance of the Day “should be funded by voluntary contributions”.

For the paltry sum of resources needed for the celebration, the relevant UN department is still able to cover the expenses from its existing budgets.

“Furthermore, I believe that the regular budget of the Department of Global Communications should always include the observance of international days proclaimed by the General Assembly,” said Ambassador Chowdhury, a former high representative of the United Nations.

Referring to the new GA resolution declaring IDWD, Mane said that “it brings us back to the question of why women in diplomacy were seen as a relevant priority at this point in the history of the UN” .

Is the main motivation for this resolution to change the reality that one of the highest positions in the United Nations, that of Secretary-General, has never been held by a woman and that only 4 women have occupied the post of President of the General Assembly compared to 73 men?, asked Mane.

“Or does it come from a desire to recognize the vast and significant contributions of women in all diplomatic processes and an aspiration to push all parts of the UN and governments to do more?”

Hopefully inspiration comes from these two motivating factors and will lead to visible change and greater accountability within governments and the UN to give even more serious attention to the representation and role of women in the diplomacy, she said.

Meanwhile, at a press conference in March last year, US Ambassador to the UN Linda Thomas-Greenfield was asked by a reporter about US support for a future female candidate for the post. of general secretary.

“You represent an administration that is committed to a need for diversity, change, women’s rights and a whole host of different things. You have arrived in time for the selection of a Secretary General, whether it is a renewal or a new candidate”.

“Speaking in a national capacity and speaking as a woman, don’t you think that after 76 years, it is time for more than half of the world’s population to be represented at the United Nations by a woman as Secretary-General?” , said the journalist. asked.

Ambassador Thomas-Greenfield: That’s a loaded question, and I’ll take it as a loaded question (laughs). We will support the most qualified candidate for the job, but we absolutely believe and support diversity.”

“We want to support gender balance, and we will review the candidates that are presented to us and consider them accordingly,” she said.

Thalif Deen, Editor-in-Chief of the United Nations Office’s Inter Press Service (IPS) news agency, is the author of the recently published book on the UN titled “No Comment—and Don’t Quote Me on That.” (2021).