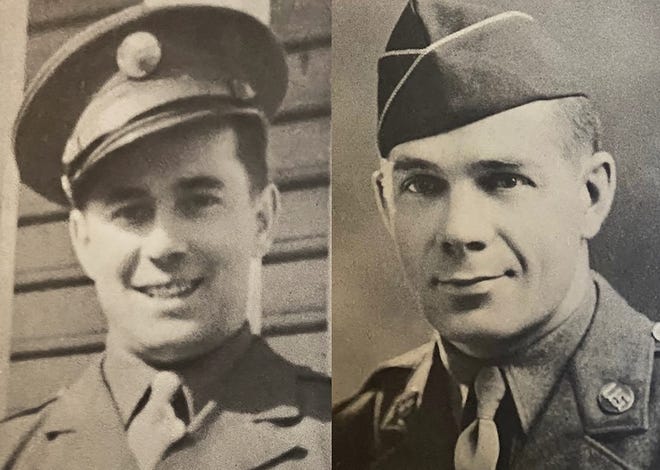 There are many tragic stories that accompany the stories of these men who were victims of war.

Soldiers whose deaths have left elderly parents in their final years haunted by memories of their son’s last moments on this earth.

In yet other cases, the young wives were also devastated when a uniformed soldier knocked on their door, or an unwanted telegram delivered the news each hoped they would never read.

Then there were the children who remained without a father, and others who never knew their father who were claimed months before their own birth.

This is the sad story of Joseph A. Brideau Jr., who will go through life with his father’s name but never know him after being born two months after his death.

This is the sequel to the Remembering Local Heroes of World War II series.

Joseph Albert Brideau was born in Peterborough, NH, on May 24, 1914, the son of Agaphie and Elizabeth (Comeau) Brideau. He grew up attending schools in Peterborough and then attended Holy Rosary School. His father was an assembler at Heywood-Wakefield Co. and the family lived at 13 Rock St.

Joseph married the former Charlotte Forrest and the two lived at 180 Greenwood Street. Their first son, Leslie A. Brideau, was born in 1938, while their second son, Joseph A. Brideau Jr., was born on November 8, 1943, two months after his father’s death.

A silver star. A distinguished flying cross:Tragic end for the men of the Grand Gardner

Before entering the service he was employed as a chief at the SS Kresge Co. in Worcester. Brideau entered the army on February 25, 1942 at Fort Devens and was sent overseas to the North African theater in August 1943.

Shortly after his arrival in Tunisia, on the night of September 7, 1943, Brideau was killed when a motorcycle he was on collided with an army truck between Bizerte and Ferryville. He was 29 years old.

He was buried in the North American Cemetery and Memorial in Carthage, Tunisia.

Her son, Joseph “Skip” A. Brideau Jr., was reportedly living in the Dudley area before his death at the age of 72 in 2016.

Donald Reed Brooks was born in Gardner on May 2, 1912, son of Edward A. and Claire (Nichols) Brooks. The family lived at 1 Cross St. in Gardner and his father was superintendent at Conant Ball.

Growing up, he was active in the First Congregational Church and attended Gardner High School, participating in the Debate Club, Senior Play and was the Business Director of Argus. After graduating from Gardner High in 1930, he attended Colgate University and George Washington University, the Institute of Diplomatic and Consular Services in Washington, DC.

After graduation, Brown was employed at Robbins Clay Production in New York, then was a sales representative at Simplex Time Recorder in Baltimore, and finally Director of the Simplex office in Washington, DC.

Brooks did his military service at Camp Wheeler, Georgia on October 20, 1942.

He participated in campaigns in Naples-Fogia, Rome-Arno, Northern Apennines, and also fought at the Siege of Livorno in Italy with Company E, 135th Infantry, 34th Infantry Division, known as the Red Bull Division with the American army.

On September 20, 1944, while serving in Italy with the 34th Infantry Division, Sgt. Brooks was tasked with covering his company’s withdrawal from an exposed position to heavy enemy machine gun fire. While firing intense backfire, Brooks tenaciously returned a large volume of fire at the enemy until he received a severe head injury.

He was posthumously awarded the Silver Star for bravery in combat, and it was noted: â€œHis courage and determination enabled the unit to withdraw without further casualties. ”

Brooks was buried in the American Military Cemetery in Castelfiorentino, Italy. There is also a gravestone in his honor on the family grounds of Crystal Lake Cemetery.

Comments and suggestions for Remembering the Local Heroes of WWII can be sent to Mike Richard at [email protected] or in writing to Mike Richard, 92 Boardley Road, Sandwich, MA 02563.