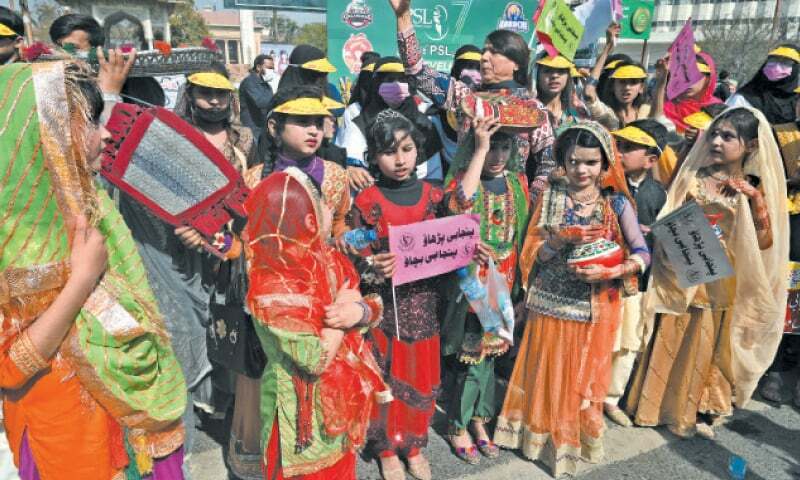 LAHORE: Punjab Lok Sangat and other organizations held a rally on Monday as part of Mother Language Day (February 21) and demanded that the government make Punjabi a compulsory subject from first class to baccalaureate level.

The rally, which was about an hour late from the scheduled time of 2 p.m. as participants could not assemble in time, was taken from the Lahore Press Club to the PIA office, Egerton Road.

Covid SOPs were not followed properly and fewer people were seen wearing masks.

The rally passed a resolution demanding that the Punjabi language be taught from primary to baccalaureate level as a compulsory subject. In every school and college, Punjabi language teachers should be appointed. The Bill declaring Punjabi as an official language is expected to be introduced in the Punjab Assembly. In all government offices, including the Punjab Assembly, the ban on speaking Punjabi should be lifted.

Speaking on the occasion, Amjad Saleem, head of Punjab Lok Sangat, said that not only the workers were exploited but also their language. He said Punjab had 62,000 schools and there would be plenty of job opportunities for Punjabi language teachers if it became a compulsory subject.

Saleem said earlier that Shehbaz Sharif failed to honor his promise to bring the Bill to the Punjab Assembly and now the current government is doing the same. He said that when the leaders demanded votes in their Punjabi language constituencies, this prevented them from passing a Punjabi language bill in the assembly.

One of the speakers, Nasir Jamil, said that Punjabi is the language of Punjab and should become the official language of the province. Haroon Ranjah of the Christian Lawyers Association said language is the standard bearer of culture and heritage and the Punjabi language should be promoted at all levels.

We are hiring now: AriensCo