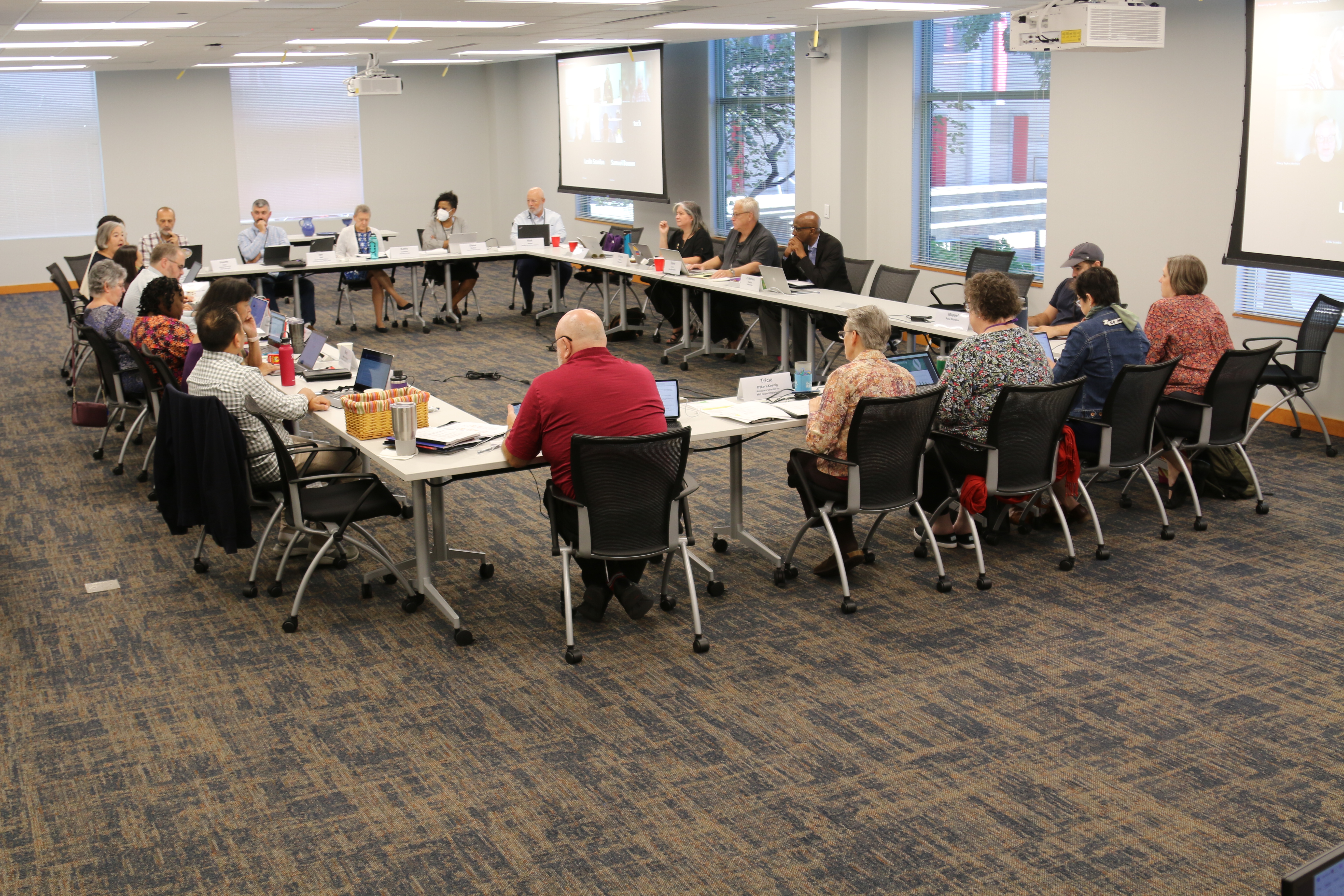 The General Assembly Office Committee held its fall meeting in the new conference space at the Presbyterian Center in Louisville. Photo by Randy Hobson.

The General Assembly Office Committee opened its fall meeting this week at the Louisville Presbyterian Center. It was the first meeting since the 225th General Assembly over the summer. While some of the time was spent on orientation and updates, the committee also assessed the recently completed Assembly and began thinking about how to approach the 226th Assembly in Salt Lake City in 2024. .

Dr. Susan Barnett, Director of Research Services for PC (USA), presented the results of her recent survey of commissioners and advisory delegates to the 225th General Assembly about their experiences with the church’s first hybrid assembly.

Barnett said 405 commissioners and advisory delegates responded to the survey.

“Overall, people are very satisfied with the language services offered at GA. Those who speak English were very pleased with the committee sessions which were offered in another language, with some adding that we should have done this before,” she said. “It is important for what the PC (USA) is and is becoming. At least 60% said it gave them the opportunity to appreciate what it was like for those whose language is not the English They found it difficult but want to do it again and are very proud that it happened.

Barnett added that most respondents were happy with the use of equity bonuses and believe the church should continue to use them and expand them denominationwide for further meetings.

“There were those who thought it was a huge time commitment. We have to increase the fact that 10% of the people who participated in the Assembly were workers who did so at a loss of income,” she said. “There are those outside of the church environment who have taken their vacations to participate, and some have not had time to take a few days off before returning to work or have sacrificed their income.”

The average respondents were either senior teachers or former leaders, Caucasian, female, and 58 years old.

“There are 2,500 comments that we are still working to analyze. Some respondents wrote one sentence, others wrote a lot more and touched on multiple topics and we continue to separate them,” Barnett said. “When they’re given the opportunity to express their views, that’s where the gems are. There are little things that appear. »

The General Assembly also voted to make the 226th Assembly a hybrid gathering, with some modifications. Committees will meet virtually, while plenaries will be held in person in Salt Lake City. COGA began researching how to structure online committee meetings. During a staff presentation on Thursday, two proposed options were presented. One option was for all committees to meet simultaneously online for three days and then travel to Salt Lake City for plenaries. The second option would have committee groups meeting online for two days over two weekends, shortening the overall commitment to the Assembly.

Much of the discussion focused on how best to meet the needs of Commissioners and Advisory Delegates while taking into account time commitments for the Assembly. The 225th Hybrid Gathering lasted three weeks. COGA and OGA staff agree that this needs to change for the 226th.

“I am a former leader and I work for an intermediate council. If I’m someone who works 40, 60, 80 hours Monday through Friday and then walks into an online committee, that’s a lot. I have been advocating for years for our Assembly to allow those who work exclusively in church to be there, but it costs those of us who work secular jobs just to be there,” he said. ex-leader Miguel Rosa Morales. “We had 15% attendance from Young Adult Advisory Delegates this summer because it was three weeks. It’s not feasible for someone in college. Summer jobs are ways that can help them financially throughout the year. We cannot sacrifice the YAADs.

There was a long discussion around modifying options to accommodate time requirements, including the possibility of postponing the election of a moderator/co-moderators after committee meetings to the start of plenary sessions.

“What would be useful for us is to have an idea of ​​your priorities for the operation of these online committees. Fewer meetings over more days or shorter days and longer meetings,” Trigger Duffert said. “Having your opinion on what you prefer will help us format something to give you.”

The conversation will continue at COGA’s online monthly meeting on October 20.