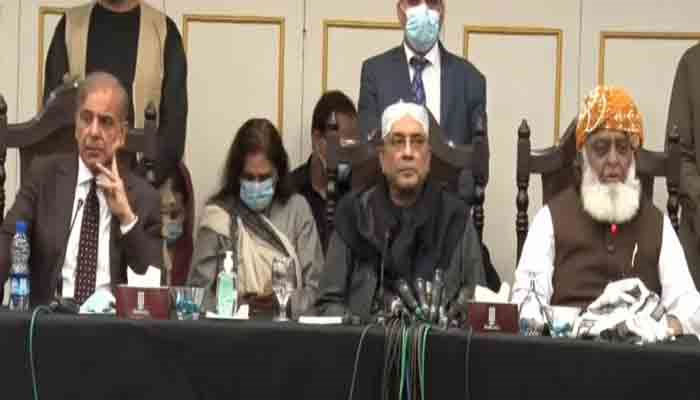 Non-confidence movement submitted for the betterment of Pakistan: Shahbaz

ISLAMABAD: The opposition has decided to submit the no-confidence motion against the prime minister for the sake of Pakistan, National Assembly Leader Shahbaz Sharif said on Tuesday.

Addressing a press conference with former PPP President and Co-President Asif Ali Zardari and JUI leader Maulana Fazlur Rehman; he said: “We made this decision for the people of Pakistan and not for ourselves.”

The outgoing PTI government has “mortgaged our future generations by taking out huge loans”, he added.

Shahbaz accused the PTI-led government of “reinstalling development projects initiated by the previous government and claiming them as their own projects”.

“They criticized the China-Pakistan Economic Corridor (CPEC) project when they were in opposition; however, they are now taking credit for it,” he said.

Shedding light on Prime Minister Imran Khan’s speech on Sunday, he said: “They have angered Pakistan’s international allies who have supported the country through all good and bad times.”

“The language used against the European Union was so inappropriate that no word can be repeated here,” Shahbaz said, recalling Prime Minister Imran Khan’s speech at a public rally in Vehari district’s Tehsil Mailsi il two days ago.

For the past three years, the “Prime Minister-elect” has been destroying Pakistan economically and socially and such destruction is unprecedented in Pakistan’s history, Shahbaz said.

“We submitted a motion of censure to the secretariat of the National Assembly and all parties signed the document,” he said.

Speaking about the opposition’s efforts to complete its membership, he said it was his responsibility and right to contact everyone and “so we also approached the PTI leadership.”

“We invite all PTI leaders whose conscience has been awakened to come and support us,” Shahbaz said.

“We are not ashamed of our attitude”

Speaking on the occasion, the leader of JUI-F – who is also chairman of the Pakistan Democratic Movement (PDM) – said that in the 2018 general elections, the PTI had “looted the mandate of voters”.

“We are not ashamed of our position,” he said, adding that the long march against the government due to start on March 23 is part of the PTI’s government outreach process.

Fazl further added that the opposition knows the true face of Prime Minister Imran Khan. “We know your true identity and the evils and filth of your mind,” he said.

“The opposition has united because of the national interest and the no confidence motion will succeed,” he said, adding that the parties stood for democracy and aimed to strengthen Pakistan.

Fazl was of the opinion that previously Pakistan had no enemies; however, because of the PTI government, several countries are now against Pakistan.

“We believe in success and the nation will soon hear good news about the success of the no confidence motion,” he said.

Journalism is a major pillar of democracy: Zardari

Speaking of the Prevention of Electronic Crimes Act (PECA), 2016; former president Asif Ali Zardari has said that journalism is one of the greatest pillars of democracy.

“Several journalists disagreed with me during PPP’s tenure, they even slandered me but I always tolerated it,” he said.

Zardari was of the view that no single party could pull the Pakistanis out of the harsh crisis alone.

“We must work together, therefore, we invite all friends in order to free our future generations from this difficult phase”, he reiterated.

As for the numbers, he said they will get all the members together and complete over 172 votes.

“Members of his own party [PTI] are also unhappy with the performance of Prime Minister Imran Khan,” he said without naming anyone.

Earlier in the day, the opposition had tabled the motion of censure at the secretariat of the National Assembly with the aim of ousting the prime minister, confirmed the spokesman of the PML-N, Marriyum Aurangzeb.

A total of 86 lawmakers from opposition parties signed the no-confidence motion, sources said. Shahida Akhtar Ali of JUI-F, Khawaja Saad Rafique of PML-N, Marriyum Aurangzeb, Ayaz Sadiq, Rana Sanaullah, Khawaja Saad Rafique and Naveed Qamar and Shazia Marri of PPP submitted the motion of no confidence and session request to the Secretariat of the AN.

In a major development, former Punjab chief minister Aleem Khan joined Jahangir Khan Tareen’s PTI faction a day earlier as he had reservations about the prime minister’s policies. However, he did not specify who will support the group once the motion of no confidence is tabled.

Opposition claims to have the numbers

The opposition is confident it has the numbers required to impeach Prime Minister Imran Khan, sources said, adding that it claims to have the backing of 202 members of the National Assembly.

The opposition claimed to have the support of 28 lawmakers from the PTI and others from a government ally, sources said.

Meanwhile, six other PTI members are in contact with PML-N, sources said.