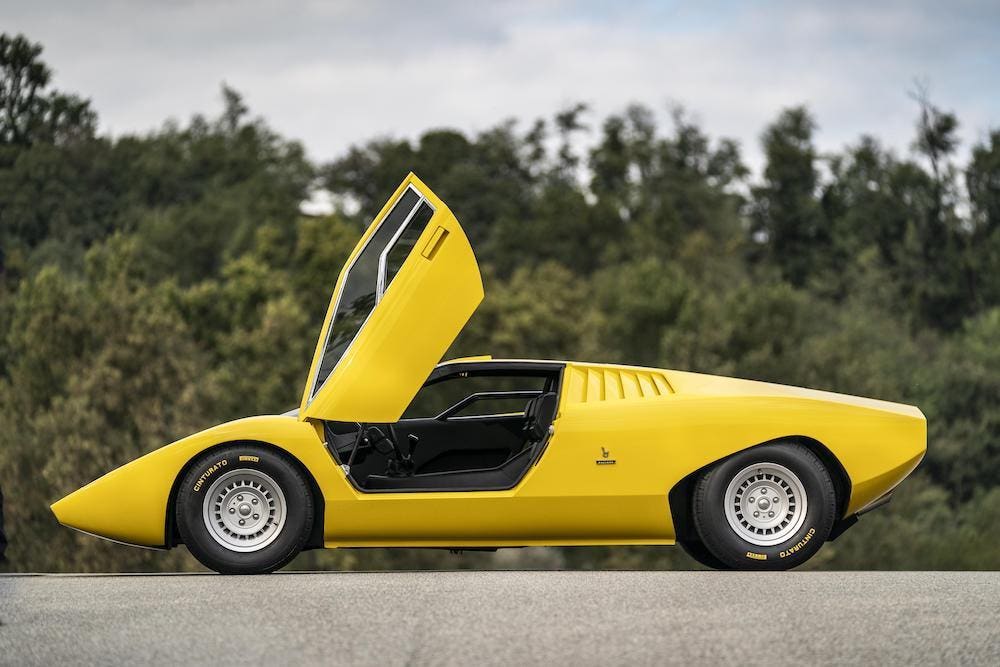 Marcello Gandini sketched some of the most radical cars in the history of automotive design. When he ran Italian studio Stile Bertone, his designs included the Lamborghini Miura, Countach and Diablo – cars so exotic in form and so daring in construction that they remain icons of automotive design.

Born in Turin in 1938, Gandini is part of the trio of illustrious Italian car designers including Giorgetto Giugiaro and Leonardo Fioravanti, all born in the same year and a few months apart. Together they have helped shape the course of automotive design.

Gandini’s best known work was between 1965 and 1980 and during his time at Bertone where clients included Alfa Romeo, BMW, Bugatti, Cizeta, CitroÃ«n, De Tomaso, Ferrari, Fiat, Lamborghini, Lancia, Maserati and Renault. He worked on futuristic concepts as well as practical road cars such as the CitroÃ«n BX, the first generation BMW 5 Series, the Innocenti Mini and the Renault Supercinq. He left Bertone to pursue an independent career in design.

Having long admired Gandini’s designs, I got in touch to discuss his life’s work and to engage his thoughts on how contemporary automotive designers approach electric cars.

Nargess Banks: During your time at Bertone, you wrote some of the most remarkable cars in design history. The mid-engined Miura and the Countach, in particular, remain as radical today as they once were. Yet you said that the architecture, construction, assembly and mechanics of the vehicle were more important to you than the looks. Am I correct in thinking that you let the design take shape naturally through the process?

Marcello Gandini: I have always seen the car as a complete object with no separation – at least in terms of its design process – between mechanics and style, both in terms of function and aesthetics. The original mechanical setting of the Miura conditioned its shape while with the Countach it was the opposite: the shape conditioned the mechanics. Both were the result of collaboration and similar thinking between me and those responsible for the mechanics. Having always had a good technical knowledge of the automobile as a whole, the close collaboration with the engineers has always been a fundamental element of my way of working, from the blank sheet to the realization of the current prototype.

You have often introduced new concepts in automobiles, such as the scissor doors which you pioneered with the Alfa Romeo 33 Carabo prototype. Is inventing new ideas and exploring avant-garde concepts at the heart of your work?

The starting point of each of my projects is always the search for the solution to one or more problems. The clearer the problem, the easier it is to come up with a brilliant solution, which sometimes means developing concepts that lead to important new ideas. This happened for example with the scissor doors of the Alfa Romeo Carabo but also in less spectacular details, such as the repeaters of the indicators on the side mirrors of the Maserati Chubasco, which were then taken over by many car manufacturers and which have become a commonly used solution today.

Since leaving Bertone you have been involved in several design projects, many of which are outside of the automotive world. How have your years in vehicle design helped shape your future projects, from architecture to interiors and helicopters?

Yes, I have worked outside of the automotive industry a number of times. For example, designing houses (exterior and interior), but also furniture and objects and, of course, helicopters. It was all very interesting but it was like a sort of digression from what interested me the most and it always happened at the same time as other works.

Looking back, which of your car models best explains your philosophy?

My philosophy has always been to try to make each project radically different from the previous ones. Each of my projects that reflect these premises is an example. As in more recent times, the car that really represents my philosophy is a project that is not public. It is part of the research that I have been carrying out for more than 20 years on new construction methods.

My experience in building prototypes and models, as well as a good knowledge of production systems in automotive factories, led me to think about possible innovations in the evolution of manufacturing methods. I have developed several projects (one in particular) and associated patents that I have presented and sold to certain car manufacturers. The main concepts involve a drastic reduction in the number of parts that make up a car, the use of new materials (mainly composites) and completely innovative assembly lines and factory architecture. All of these ideas are very advanced, partially used by manufacturers. They are not yet easy to fit into current production systems, but represent a great personal achievement in my experience as a designer.

In the meantime, I’m interested in what you see as the possibilities and pitfalls of difficult formal language in the afterburner era as we explore new powertrains (battery-electric / fuel cell) and machine learning?

New modes of propulsion in cars offer an important opportunity to see the car as an expression of something different. He may be able to communicate different feelings and forms in terms of life on board, in the way we perceive him and conduct him. It’s still an underdeveloped area – let’s say it’s a wish, which will come true in the future.

And what do you think of the new generation of electric cars?

I think the electric car is, at the moment, a great missed opportunity in terms of design. The architecture and package made possible by the battery-powered motors opens up an endless number of possibilities to innovate in the shape and general concept of the entire vehicle. Designers and marketers have chosen and continue to choose to emulate traditional-powered cars to stay on the road safely. Nothing in an electric car today makes you say at first glance: “Wow, this is a different car, it carries a new message, it obviously speaks of a new language of change and innovation”. That’s a shame.