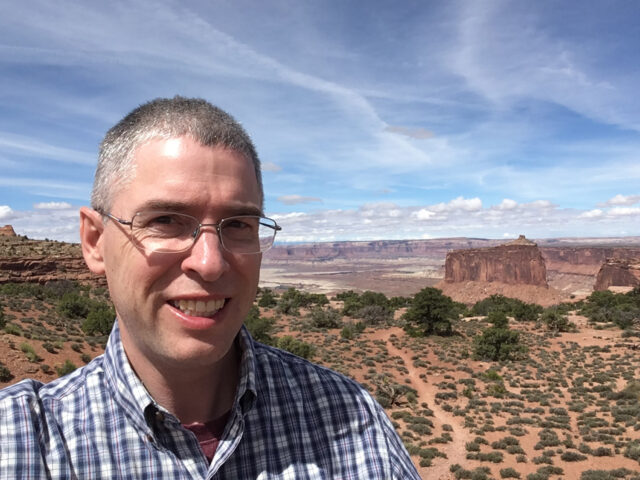 When David Carter was an undergraduate at UM in the late 1980s, he took a job at the engineering library.

He was an engineering student at the time, and the work at the library would help him afford the comic books he collected.

“Unbeknownst to me, this (library) job set my career on a completely different path,” he said.

The path led Carter to his current position as video game archivist for the Computer and Video Games Archive and comic book librarian – something that combines two childhood sweethearts into one fulfilling career.

“I was a kid in the 1970s and 1980s in the suburbs of Pontiac. What else was I going to do? he asked jokingly. “I never thought we would make a career out of this stuff. I always say 12-year-old Dave would be very impressed with what 50-year-old Dave was doing.

Carter’s exposure and passion for computers began, oddly enough, by taking piano lessons. As preteens, he and his sister took lessons from a family friend, and while his sister was teaching her lesson, Carter was allowed to use that family’s Apple II computer.

While initially only playing games like “Lemonade Stand” on the console, he became intrigued with programming, skimmed through the Apple manual that came with it, and taught himself coding.

His interest and love for comics and comics started even earlier. Carter was enamored with the Peanuts comic strip and had a copy of “Good Ol’ Charlie Brown”—a collection of a few hundred comic strips published between 1955 and 1957—which he read so often it was torn to shreds.

It has a reprint of this book as well as the entire 26-volume collection of “The Complete Peanuts”, hardcover books in the series from the first strip was published in 1950 until the last in 2000.

“I had a stuffed Snoopy, I watched all the Peanuts cartoons on TV, like ‘Charlie Brown Christmas,'” he said. “Peanuts was probably my first comic book love as far as that goes.”

He quickly turned to comics based on superheroes after watching “Super Friends” on TV and his father bought him three comics while he was sick in bed. One of the three books was a Superman comic, and it helped inspire his unique name — superman — when he was a student at UM.

“I got it in 1989. They told me to pick something you’ll remember that has to be eight characters or less, not knowing it would be attached to an email and follow me throughout my life. career,” he said. “It was a little awkward when I was trying to look for jobs out of grad school, but I’m not embarrassed anymore because it kind of fits my job and it’s very memorable. No one ever forgets my email address.

Not very particular about the comics he reads – Carter said he likes “comics for their comedic side” – he eventually amassed a collection of over 40,000 books.

He has reduced the collection somewhat, but still has to use a storage locker to house the majority of his books.

“I’m trying to get rid of them, but I can’t just get rid of them because it’s like cutting off your arm, even though I know I’ll never read them 95% again,” he said. -he declares. “There are some that have sentimental value, some that I could read again, some that I haven’t read yet, and then there are those that I just have to get rid of for one reason or another. But they keep creating new ones.

“I try to break the collector mentality, but it’s hard to do.”

Carter does not have a similar collection of video games. In fact, he has a PlayStation 3 game console but only a handful of games he rarely plays. When he wants to play a video game, he turns to racing or music-themed games or abstract shooters, such as “Geometry Wars” or “Asteroids”.

“So I like driving things, pretending to be a rock star and shooting blobs,” he said.

Pretending to be a rock star takes Carter back to his days playing bass guitar in a number of garage bands. He said he only had one paid gig during his playing days, so a music career was unlikely. For several years before the COVID-19 pandemic, he sang with the Ann Arbor Civic Chorus but has yet to return to the group.

“Maybe one day,” he said. “Music was always something I was into.”

His other interest in gaming stems from his days as an undergrad at UM living in Bursley Hall, which had a small arcade with pinball machines. After eating in the cafeteria, Carter and her roommates and friends spent about an hour in the arcade playing pinball.

“It was every day, so after four years I got pretty good at playing pinball,” he said. “In Kalamazoo, there’s a ‘Pinball at the Zoo’ thing where collectors bring their pinball machines, you pay $17 and you can play pinball all day. Before the pandemic, I would get together with friends from college and we would converge on Kalamazoo and play pinball.

“I’m still not bad. I may not have the exact skills I had when I played every day, but it’s kind of like riding a bike.

If the urge to play a video game strikes, Carter can always fire up one of the thousands of games for the 70 game systems available on Computer and Video Game Archive. CVGA reopened in late August in its new home on the fourth floor of the Shapiro Library after a three-month move from the basement of the Duderstadt Library to North Campus.

Carter said the decision was driven in part by feedback from an evaluation report that indicated the majority of CVGA’s use and potential use was in LSA. Preserving old video game consoles is important, he said, to understanding the history of our culture.

While many online archives focus on emulating game systems, CVGA is more focused on preserving original games and consoles.

“Playing an emulated Nintendo game on your computer keyboard isn’t the same as playing it on a real Nintendo with that little square controller on a 1982 CRT TV, which is an experience we can give to people,” he said.

What memorable workplace moment stands out?

So many, but likely one of many CVGA class sessions where students were tasked with playing games on systems they had never played before.

What can’t you live without?

Well, food, water and shelter of course; but for the purposes of this Q&A, I’ll say ice cream. And the comics.

Name your favorite place on campus.

I like the engineering fountain and reflecting pool on north campus.

Help people find information. Show them an information tool that they didn’t know existed and that makes their university life easier. We librarians live for it!

What are you currently reading?

“Game Wizards: The Epic Battle for Dungeons & Dragons” by Jon Peterson and “The Invisible Life of Addie LaRue” by VE Schwab

Who has had the greatest influence on your career path?

Probably Jim Ottaviani and Joe Janes, who both showed me non-traditional paths to libraries and mentored me early in my career.