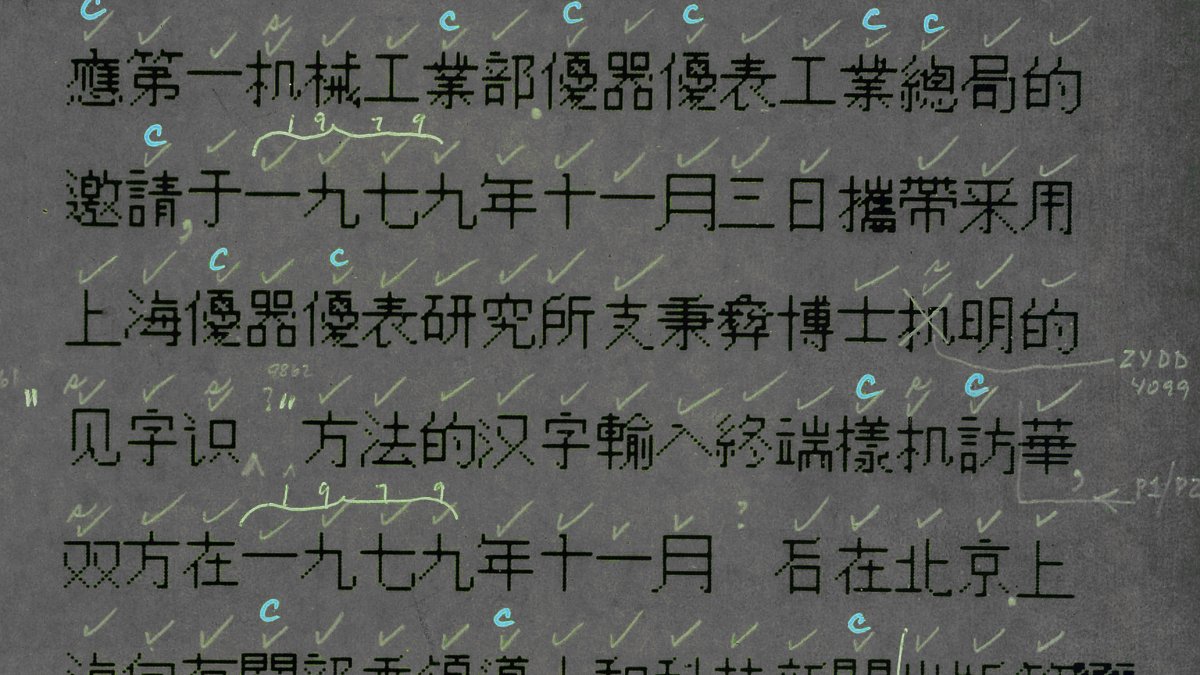 
Bruce Rosenblum turned on his Apple II, the power-on tone could be heard, then the floppy disk drive slammed. After a series of keystrokes, Sanyo’s 12-inch monitor began to glow. A green grid appeared, 16 units wide and 16 units high. It was “Gridmaster,” a program Bruce had developed in the BASIC programming language to create one of the world’s first Chinese digital fonts. He developed the font for an experimental calculator called Sinotype III, which was one of the first PCs to understand the Chinese language – both input and output.

There were no Chinese computers

At that time, in the late 1970s and early 1980s, no personal computers were produced in the country in China. To build their “Chinese” PC, the Rosenblum team reprogrammed an Apple II to work with the language of the Middle Kingdom. His to-do list was long. He had to reprogram the operating system from scratch, because Apple’s DOS 3.3 simply did not allow input and output of texts with Chinese characters. Likewise, a Chinese word processor wrote by hand, a task he worked on tirelessly for months.

Although Gridmaster is a simple program, it defined the task it was supposed to do – creating digital bitmaps of thousands of Chinese characters – poses a major design challenge. In fact, creating the font for the Sinotype III – a machine then developed by the Graphics Arts Research Foundation (GARF) in Cambridge, Massachusetts – took much longer than building the computers themselves. But without a font, there would be no way to display Chinese characters on the screen or print them on the machine’s dot matrix printer.

For each Chinese character, the designers had to make 256 separate decisions, one for each possible pixel in each of the bitmap characters. Multiplied by thousands of characters, that literally meant hundreds of thousands of decisions in a development process that took over two years.

The development of Gridmaster – which Rosenblum described to Technology Review as “awkward to use at best” – allowed his father Louis Rosenblum, together with GARF, to outsource the responsibility for creating the digital font. With any Apple II computer running Gridmaster from a floppy disk, temporary staff could create and save new bitmaps for Chinese police. As soon as these bitmaps were created and stored, the Rosenblums were able to install them on the Sinotype III using a second program (also developed by Bruce).

The Sinotype III was never launched. Nonetheless, the meticulous work that went into its development – including the development of its Chinese bitmap font – was of utmost importance in solving a complex global technical problem: how can you equip a computer then narrow to read the Chinese, one of the most complex and used languages ​​in the world?

With the advent of computers and word processing in the West, engineers and designers discovered that a low resolution digital font for English could be built on a 5 by 7 bitmap grid that only required five bytes of memory by symbol. Storing the 128 low-resolution characters in what is known as the American Standard Code for Information Interchange (ASCII), which contains all the letters of the English alphabet, the digits 0 to 9, and common punctuation, required only 640 bytes of memory – a tiny fraction of the 64 kilobytes of Apple II.

The grid was too small

But there are tens of thousands of Chinese characters, and a 5 × 7 grid was too small to be read. Chinese requires a grid of at least 16 x 16 pixels or more, that is, at least 32 bytes of memory (256 bits) per character. If you imagine a font containing 70,000 Chinese characters in low resolution, the total memory required would exceed two megabytes, a gigantic number for the time. Even a font containing only 8,000 of the most common Chinese characters would take around 256 kilobytes just to store the bitmaps. This was four times the total storage capacity of most entry-level computers in the early 1980s.

As difficult as this storage hurdle was to overcome, the biggest problems with producing low-resolution Chinese fonts in the 1970s and 1980s were aesthetic and design-related. Long before anyone even started working on a program like Gridmaster, most of the work was done outside the computer, with a pen, paper, and correction fluid. Designers spent years designing bitmaps that met the need for low storage space and maintained a minimum of calligraphic elegance. Those who created this character set by hand by drawing rough bitmaps for some Chinese characters or scanning them with Gridmaster included Lily Huan-Ming Ling and Ellen Di Giovanni.

The central problem the designers faced was the combination of two fundamentally different ways of writing Chinese: the handwritten character, which is created with a pen or brush, and the bitmap glyph, which consists of an arrangement of pixels on the X and Y. -axis is generated. The designers had to decide how (and if) they wanted to try to recreate the main spelling characteristics of the Chinese manuscript.

In the case of the Sinotype III font, the process of designing and scanning low-resolution Chinese bitmaps has been widely documented. One of the most fascinating archival sources from this period is a file filled with grids with hand-drawn sketches that were later to be digitized into bitmaps for several thousand Chinese characters. Each of these characters has been carefully laid out and, for the most part, edited by Louis Rosenblum and GARF, using correction fluid to erase any “bits” the typographer disapproved of. A second set of red characters was then placed over the first set of green characters to represent the “final” design. It was only then that the data entry work began.

Given the large number of bitmaps the team had to design – at least 3,000 (and ideally many more) if the device were to meet the needs of Chinese consumers – one would assume that the designers were looking for ways to make their jobs easier. . For example, one possibility would have been to duplicate Chinese stems – the building blocks of a character – when they appeared in roughly the same place, size, and alignment from character to character. When creating the many dozen common Chinese characters of a subspecies, for example, the GARF team could only have created a standard bitmap (and theoretically should have it) and then replicated it in each character. in which this radical appears.

However, such mechanistic decisions were not made, as archival documents show. On the contrary, Louis Rosenblum insisted that designers adjust each of these signage elements – often almost imperceptibly – to ensure that they harmonized with the overall sign in which they appeared. There are minor changes in pixel widths and arcs layout, some of which are only a pixel away. This level of precision has been the rule rather than the exception in all scripture. Despite the seemingly tight space in which designers had to work, they had an overwhelming number of decisions to make. And each of those decisions affected every other decision made for a particular character, as adding a single pixel often changed the overall horizontal and vertical balance.

The pursuit of symmetry

The inflexible size of the grid influenced the work of designers in other unexpected ways. This is most evident in the evil problem of achieving symmetry. Symmetrical layouts – which are full of Chinese characters – were especially difficult to depict in low-resolution grids because, according to the rules of mathematics, creating symmetry requires areas of space of unequal size. Equal-sized bitmap grids (like the 16 by 16 grid) made symmetry impossible. GARF managed to achieve symmetry by using only part of the global grid in many cases: just a 15 by 15 region in the 16 by 16 global grid. This further reduced the usable area.

Of course, low resolution didn’t stay “low” for long. Advances in computer technology have led to ever higher resolution bitmaps, ever faster processing speeds, and ever lower memory costs. In today’s age of 4K and Retina displays, it can be difficult to appreciate the skills – both aesthetic and technical – that made it possible to create China’s first bitmap fonts, however limited they might be. But it was solutions like these that ultimately gave one-sixth of the world’s population access to computers, new media and then the Internet.

Tom Mullaney is Professor of Chinese History at Stanford University, Guggenheim Fellow, and Kluge Chair in Technology and Society at the Library of Congress. He is the author of the forthcoming book “The Chinese Computer” – the first comprehensive history of computing in Chinese.

Application programming interface (API)? – Everything you need to know