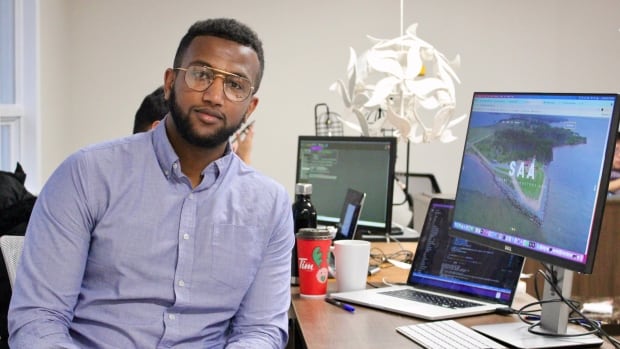 UPEI student Essayas Kassa can’t forget the moment his dream of playing in the NBA was shattered.

It was October 2017 and the 17-year-old was in his second year playing for Ethiopia’s national under-19 basketball team.

He was warming up for what was supposed to be just another game in his hometown of Addis Ababa. He was doing “suicide” running drills – repeatedly sprinting point to point, back and forth – as part of the warm-up routine.

He was fast and trained for hours after school. He was hoping to go to the United States, play college basketball and be drafted into the NBA.

As he sprinted, he glanced around. His school friends, teachers and fans were in the stands to cheer him on.

Suddenly his left leg did not rise and he fell face first. He felt something snap in his thigh.

His teammates took him away and he went to the hospital. He said he didn’t feel much pain, possibly from the adrenaline rushing through his body. Maybe it was just a cramp or a minor injury, he thought.

In the hospital room, the doctor returned with the result of his x-ray.

â€œI don’t think there is a future for you in basketball,â€ the doctor said.

Kassa tore his hamstrings so badly that a full recovery was not possible.

â€œIt was one of those points where I just felt empty,â€ he said. “Like, I had no more goal.”

He went into a depression. Basketball was his life.

He once sat down with his parents, who advised him to consider other options as he was in his final year of high school and had to make a decision. He wasn’t keen on computers and wasn’t even very good at math, but he couldn’t imagine studying anything else, like business or economics.

He wanted to choose an affordable university to attend North America. The UPEI stood out.

Kassa arrived in Prince Edward Island in the fall of 2018. He wrestled a lot in the first semester. There were concepts he didn’t understand because, he admits, he didn’t pay much attention to them in high school.

He was disappointed when he checked his GPA at the end of the first half: 3.2. It should have been better than that, he thought. Then his competitive instinct, honed by basketball, manifested itself.

I took that motivation, that mentality that I had in basketball, where you have to work hard to be able to shoot, to be able to layup, which is the same thing in programming.– Essayas Kassa

“I took this motivation, this mentality that I had in basketball, where you have to work hard to be able to shoot, to be able to make a lay-up, which is the same in the lineup,” he said. .

Kassa started asking his teachers for extra work. He was spending more time in the library.

His GPA rose to 4.0 at the end of the second semester. Now, with a GPA of 4.2, he has been recruited to work on a number of tech-related projects.

One of these projects is the Smart Agriculture app, which is in its prototype phase. The web platform provides live weather data from over 60 weather stations in Prince Edward Island. It can also help Island farmers calculate the water requirements for wheat and potato crops.

Kassa was recruited by the project leader, Aitazaz Farooque, associate professor at the School of Climate Change and Adaptation at UPEI. Kassa is the main software developer for the project.

He also worked on a translation tool called NuChat, a new feature of Nu Wel Com, an app that provides information to help newcomers adjust to life on PEI.

NuChat facilitates communication between people who speak different languages. It works by typing a message in a language, like English, which is instantly translated into the recipient’s preferred language, like Arabic.

â€œI am very happy because the work I have done in this first year is paying off so I can make an impact on lives,â€ he said.

And he’s proud to be one of the many international students who are making a difference in the province.

â€œThey are deploying their talents, they are dedicating their time, their efforts to make Prince Edward Island a better place. And it’s really amazing to see.