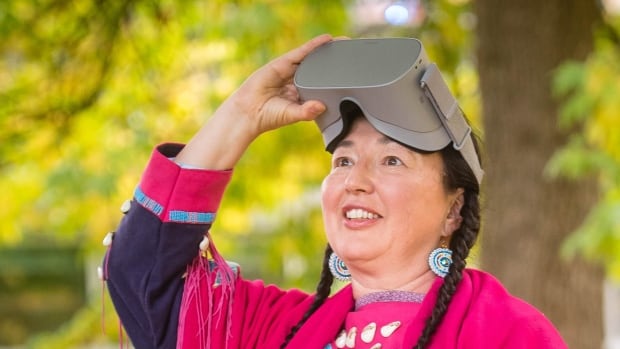 Sara Child is working to revive her language, Kwak’wala, on northern Vancouver Island.

According to estimates by the First People Cultural Council of British Columbia, there are only about 140 fluent Kwak’wala speakers in more than a dozen First Nations.

Child, a member of the Kwagu’ł band and professor of native education at North Island College in Courtenay, on the east coast of Vancouver Island, says most speakers in her community are in their 70s and 80s.

She created the Sadoes not havekola Foundation, which works with elders to find ways to pass on the language.

Language, she says, is inextricably linked to the land and well-being, and requires different ways of learning.

“After decades of forced disconnection from the land and changes to our way of life, many of our elders, the language of the land is trapped in their memories,” Child said.

“And so we spent hours working with the elders, trying to unlock that knowledge of the country’s language.”

Child realized the need to tap into the vast archive of Kwak’wala recordings amassed by anthropologists and other researchers over nearly a century.

With funding from MITACS, a government-funded nonprofit that supports innovation, they are working to develop an artificial intelligence machine that will comb through these recordings and transcribe the language into usable resources.

“If we try to do it manually, it could take a virtual lifetime of a whole team of people to transcribe it, rewrite it, and put it into a usable format,” Child said.

Most voice-to-text technologies are developed for English. While English is noun-based, many indigenous languages ​​like Kwak’wala are verb-centric, requiring researchers to develop their own recognition system from scratch.

The work may be hard, but the potential reward could be huge.

“By building the technology tool, the voice recognition tool, we can tap into this incredible resource that will help us track down and recover the language trapped in the archives,” Child said.

Caroline Running Wolf, a PhD student at the University of British Columbia, is designing immersive technology to teach Kwak’wala in a terrestrial environment – from anywhere.

Although she speaks several languages, she always had a hard time learning Raven, the language of her father’s people in Montana, because she didn’t live there.

It aims to use technologies, such as virtual or augmented reality, to enable people to truly immerse themselves in a language.

“So imagine if you could immerse yourself in a specific Indigenous culture and interact and talk with elders, for example, as you embarked on a virtual canoe trip through your home territory,” she said. . “So you would be immersed, having fun and learning to speak the language at the same time.”

She says traditional funders wouldn’t have considered a project like this.

“They’re still caught in this false dichotomy, on one side is Indigenous traditional knowledge and language, and on the other side of that dichotomy is technology. And that’s just not true.”

“Our language is our medicine,” she said.

“They are medicine for our soul. They are really medicine for the earth, to reconnect us to the earth in a responsible and humble way.”