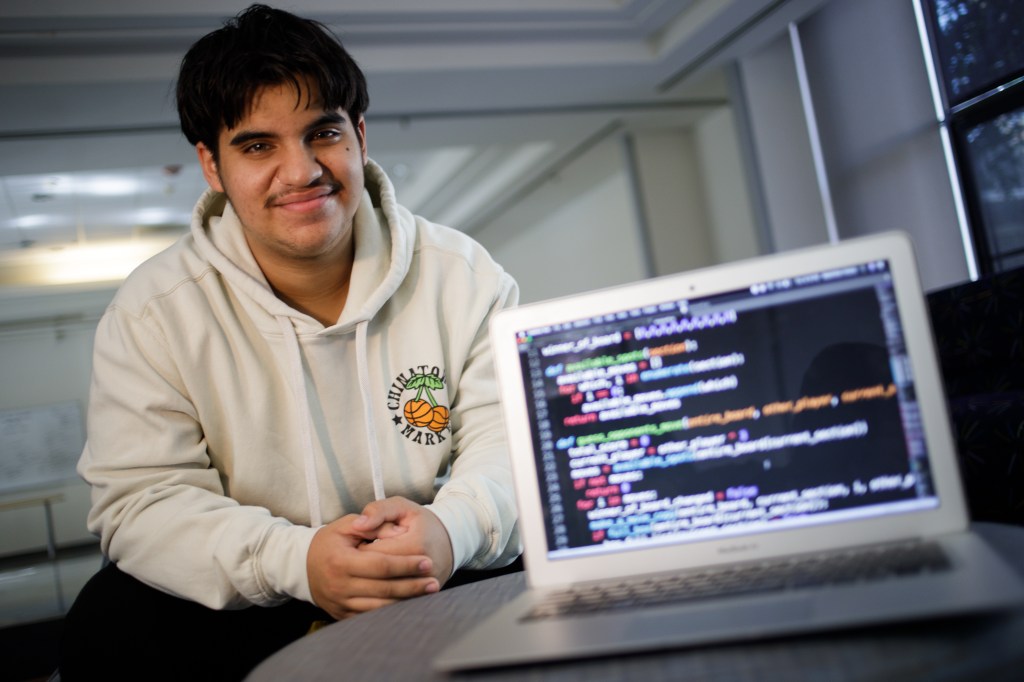 Max Chavez remembers when he finally found the coding error that caused his two-dimensional red and yellow ball to defy the laws of physics.

He was watching the ball on an old Mac computer on a cafeteria table at the East Palo Alto Academy. That was in 2016, he was a freshman in high school and he had become a member of StreetCode Academy, a local nonprofit that provided free training for students to bridge the tech divide in Silicon Valley.

Instead of glancing at the wall, the bullet returned to its original path. A StreetCode professor had Chavez go through every line of his code until Chavez finally identified the culprit: a stray “-1”. He remembers the surge of excitement he felt – and its wider meaning.

“People who come from my community are not fortunate enough to have that spark,” Chavez said.

The following year, he himself became a StreetCode teacher. Now he is studying computer science at UC Berkeley. And StreetCode, which started out in a cafeteria, has moved to the Facebook campus.

Founded in 2016 with $ 1 million in seed funding from Chris Cox, product manager at Facebook, it has grown from around 20 students per year to around 2,000, mostly in East Palo Alto. The organization connects students from East Palo Alto, where the median income is $ 30,000 per year, with tech professionals, offers training in various areas of IT, and provides seed funding for student startups.

Although East Palo Alto is surrounded by the huge capital of Facebook, Google, and Stanford University, many of its residents have little access to the tools of the tech industry. “We have community members inside this environment who have no access, no computer, no mentor, no conception of what technology is,” said Olatunde Sobomehin, CEO and co-founder of StreetCode. “We are really in this desert, literally in the middle of the Amazon rainforest.”

Chavez started playing with the code in college by watching tutorials online. “I was probably in the hack,” he smiles. “I have to learn somewhere.” But while the East Palo Alto Academy was located in the heart of the technology capital of the world, it did not have any computer classes, like the “Computer Programming 1-3” course available at Palo Alto Private High School, Merger at $ 20,000 per year. .

Chavez says this has serious consequences. He reported the problem of artificial intelligence facial recognition fails to decipher non-white faces. Just a few weeks ago, the The New York Times reported that Facebook’s artificial intelligence asked users watching a video that included black males if they wanted to see more primate videos. Facebook has apologized and is fixing the issue.

Recently, StreetCode has developed a new way to use non-fungible tokens, or NFTs, for its own fundraising. NFTs are unique digital copies of images, videos, or even Tweets that someone can purchase, like a Leonardo da Vinci painting that only exists behind a computer screen. After a chance online encounter at the behest of MC Hammer, StreetCode developed philanthropic NFTs, or pNFTs. StreetCode hopes the new approach will bring a small part of the 174 million dollars spent on DTV since 2017 back to nonprofits and StreetCode students like Brian Miller, a seventh grade student at Greene Middle School in Palo Alto.

Miller’s affinity for video games like Minecraft and Street Fighter morphed into an interest in coding when he was around 7 years old.

After a recommendation from a friend of his mother’s, Miller landed in a StreetCode orientation and got hooked. Her mother, Bridget Miller, was equally excited. Tech jobs are the future, she said.

“It can give you the key to Silicon Valley,” she said. “Where I might not be a part of this Silicon Valley company myself, StreetCode can go where my son can, and he can lead the way and bring diversity. “