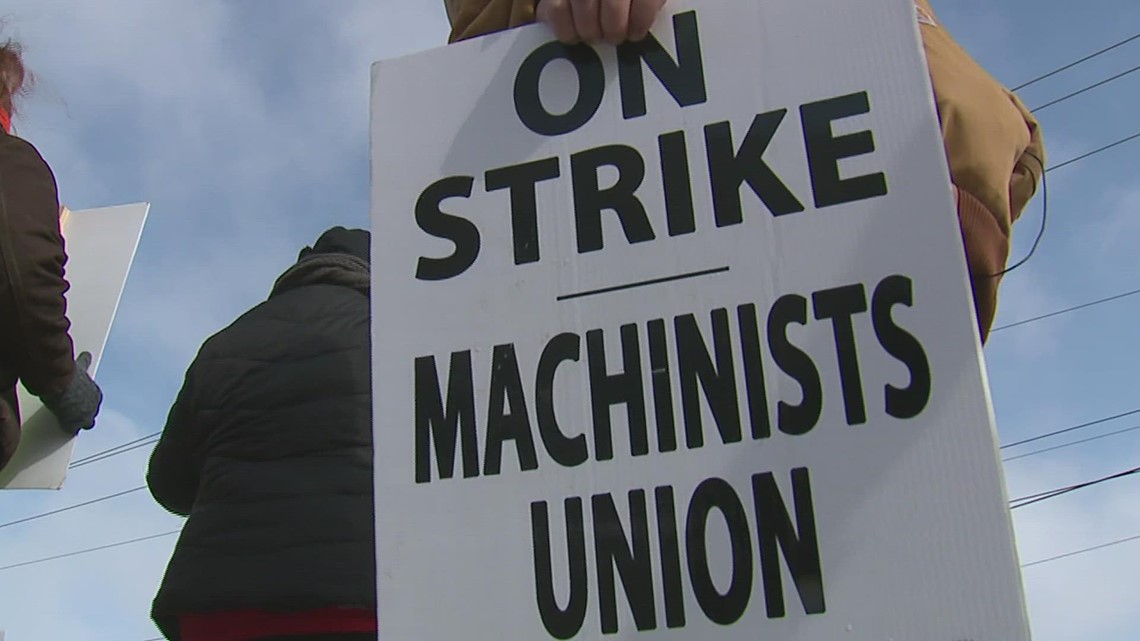 DAVENPORT, Iowa — Despite stalled negotiations and threats from replacement workers, an International Association of Machinists and Aerospace Workers (IAM) member on strike at Eaton Corporation says the picket line is holding firm .

Eaton workers said the company’s second contract offer was almost the same as the first, except for the original 3-year deal being upgraded to a 5-year deal. As a result, 97% of union members voted against Eaton’s second proposal on March 4.

This overwhelming majority corresponds to the union’s 98% approval vote to call the strike in the first place.

That same day, Eaton’s announced that it would begin looking for permanent replacements for striking union workers. An Eaton spokesperson also said the company would not be available for further negotiations until the week of March 14 at the earliest.

But now, on day 18 of the strike, a local assembler says morale and confidence are high on the picket lines.

“We’re ready to be here until they want to give us something fair so we can come back and get to work and build the products we love to build,” said Craig West.

West has worked at the facility which has now been owned by Eaton for two and a half years. The assembler said local IAM members did not expect to be impressed with the company’s second contract offer.

“They offered us the same contract as before, they just added two years to it,” he said. “I think we have six people who voted for the contract, but it’s a pretty unanimous feeling among everyone.”

He remains hopeful of a proposal that addresses some of the strikers’ main concerns about wages, health care and retirement.

According to West, Eaton’s first contract included a 2.5% salary increase for the first year, followed by a 3% increase in the second and third years. He said the second offer was largely similar, even with two more years after the deal. These figures have not been confirmed by the union or Eaton.

But his main concerns, he tells News 8, are twofold.

“I think the cost of living is up front and an option to keep our PPO plan that most of us already have, so we’re not going to go broke trying to provide health care to our families,” West said. “They took our PPO plan away from us. So not having a plan forces us all to accept these high-deductible plans that would just take thousands of dollars out of our pockets.”

An Eaton spokesperson said the company is now looking to find new workers to continue its day-to-day operations. Due to the long period of time required to train employees on Eaton’s specific military and aerospace products, the company said these replacements will be permanent.

“This is not a decision we take lightly,” read a statement from Eaton. “And our goal remains to reach a mutually satisfactory agreement with the union.”

But it’s this long training period that West is betting on.

“It’s just too skilled a job for someone to come off the streets and take. It’s not going to happen,” he said. “It’s just a simple tactic.”

He says the training period for his first job at Eaton’s (formerly known as Cobham) lasted about six months. And he is still learning the tricks of the trade in his current position, which he has held since July.

“It’s a skilled workforce. We’ve spent a lot of time learning, a lot of us have degrees and things like that. We’re a very educated workforce,” West said. . “We don’t build – you know, glue Legos together here.”

Already workers, including West, have alleged that Eaton was hiring workers.

“The other day I think they brought in 41 people and then another day they split them between two buses so it looked like there were more but it was still the same number of people “, did he declare. “Nothing really surprises us at the moment.”

But he says that still wasn’t enough to sway his vote on the second contract offer.

“To replace all of us would take years and years of training because a lot of the things we do here, they don’t do anywhere else. Few people are going to come in with experience of what we do,” says Where is.

It’s this confidence that helps attackers dig the line a little further, despite harsh weather conditions and little protection from the elements.

“Whatever we lose now… we’re probably not going to get it back,” West said.

Eaton’s Davenport plant is located on the west side of town on Hickory Grove Road. She specializes in employment contracts for the US government and other aerospace companies. The striking workers manufacture a variety of products, including air-to-air refueling equipment, fuel tank reversal systems and other environmental products for the military, according to a company spokesperson.

The Davenport plant employs nearly 1,000 people, placing it among the top 20 employers in Quad Cities, according to the Quad Cities Chamber.

Non-confidence movement submitted for the betterment of Pakistan: Shahbaz