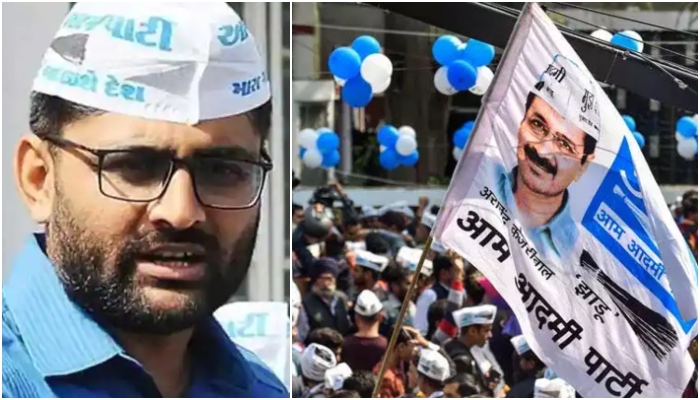 On Saturday, Gujarat Police filed an FIR against Aam Aadmi Party Gujarat Unit Chairman Gopal Italia for defaming BJP leaders and inciting people to commit an offense against the state or public tranquility . The FIR was registered by Gujarat Police at Umra Police Station in Surat.

According to reports, Gujarat leader of AAP also used derogatory language against Gujarat BJP leader CR Paatil and Minister Harsh Sanghavi during a rally that took place ahead of Gujarat Assembly elections in 2022. The FIR was registered under Articles 469, 500 (punishment for defamation), 504, 505(1) B of the CPI.

Reportedly, the FIR was filed by the Gujarat Police based on the complaint registered by a citizen named Pratap Chodvadiya. In his complaint against Italy, Chodvadiya said the AAP leader intentionally insulted BJP leaders. “He (Italy) called the BJP a party of morons and incited the public by declaring that the AAP would take revenge for every drop of blood,” the complaint read.

According to the complaint, AAP Gujarat leader called BJP leader CR Paatil a “former smuggler” and State Interior Minister Harsh Sanghvi a “Drugs Sanghvi”. The case will be investigated by Inspector AH Rajput of Gujarat Police.

Meanwhile, reacting to the complaint, AAP Gujarat chief Gopal Italia said: “They will file a complaint against me but will not take action against drug landers and drug mafias, from such FIR will not frighten me and I will not succumb to the pressure”.

Earlier in July 2021, a similar FIR was filed by Gujarat Police against Italy for its infamous remarks on Hindu community and rituals. The FIR was later filed based on the complaint of a member of Hindu IT Cell. The complaint pointed to Italia’s remarks where he publicly said, “I am ashamed of these people (referring to people who attend satsangs). This makes me angry. If you don’t like what I said, block me. We don’t need those who clap like hijras in the name of rituals and culture. Some Sadhu will say nonsense from the stage and we have to clap like hijras? »