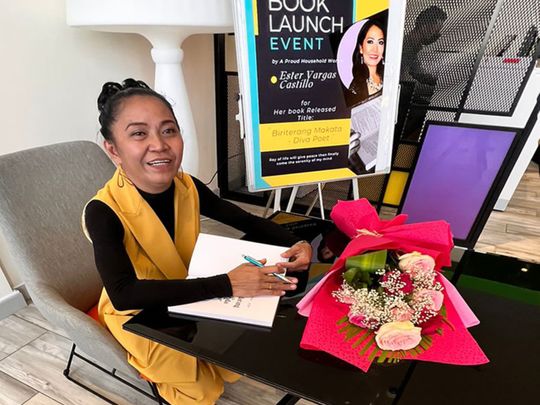 Dubai: Ester Vargas-Castillo, 50, is known among her peers and the online world as “Biriterang Makata”. It’s a Filipino phrase that loosely means “Poet Diva” in English. “Biriterang Makata” is also the title of her first book of poetry – released recently – containing 136 award-winning poems she wrote during the height of the pandemic.

Castillo has also been given the name ‘Biriterang Makata’ because she is a soprano and an active member of FilSoc Chorale, which falls under the Filipino Social Club which performed at Expo 2020 Dubai last year. She is both a singer and a poet.

Speaking to Gulf News, Castillo said: ‘When you say you work as a nanny or a maid, people sometimes look down on you, thinking you’re illiterate and uneducated, that you’re only good for the chores housewives. Thanks to my friends who helped me publish my book, a nanny like me showed that we have every right and ability to shine and make our mark in society. If the opportunity arises, we can express ourselves eloquently and write our own poetry and our own stories,” she stressed.

Castillo continued, “Most of my poems, however, are about my own emotions – the hidden pains in the rhymes told by a third person. I also let go of my feelings which got bottled up. But more importantly, I wrote about the melancholy – the sadness of being away from my family for too long – as well as my long yearning to return home for good, even if I have to stay and work here for good. of my children.”

Castillo said her book was inspired by and dedicated to her four children – Christopher Lester, Christine Abegail, Chloe Felixia and Gideon Chris.

A poem, titled ‘Aging Hand’, is addressed to his son:

Now you’re a handsome young man./ I wanted to hold you as long as possible./ One day you’ll venture to a distant land./ But please don’t forget Mom’s aging hand.’

Castillo, who was born in Cebu, a province in the central Philippines, started writing poetry late in her life. “It was actually during the height of the COVID-19 pandemic, when most people were struggling with isolation and depression due to the closures, that I seriously started jotting down my thoughts and thoughts. feelings in verses, which I’ve posted on various online poetry sites,” she said. added.

“My early poems were about love, friendship, and most importantly, my job as a domestic helper,” Castillo noted, adding, “I caught the attention of readers online and my poems were also recognized in various online contests in the Philippines and abroad. It gave me the boost to write more poems. So far, I have written about 500 poems,” she said.

Some of the awards won by her include Hall of Fame, Poet of the Year 2021, awarded by Philippines-based Bigkis ng Panitik; Reyna ng Balagtasan 2022, awarded by Horizons, an organization of talented migrant workers based in Hong Kong; Poet of the Week (Passion of Poetry), for her poems ‘Sound of Silence’, ‘When Rain Reigns’ and ‘St Basil’s Cathedral’; Platinum Award (for various poems in Filipino); Excellence Award for “Outcry of Valor”; Gold Award for ‘Figures of (Love) Speech’ and ‘Healing Ray’; Silver Award for Ode/Rhyme Mnemonics, and more. It was in February, when she tested positive for COVID-19, that Castillo decided to collect her winning poems into a book. She got support from Manila-based McKinley Publishing Hub, which helped her design and layout her book, as well as making it available on Amazon. His friends and supporters pooled money and printed 200 copies for distribution in the United Arab Emirates.

Castillo’s book launch was recently attended by friends and employers. She first came to Dubai in 2017 and settled down as a domestic worker because her previous job – where she worked as a teaching assistant and accounting clerk – paid her a monthly salary of 2 300 dhs. “Fortunately, I found an employer who was willing to pay better,” she added.

Castillo said she was also grateful that her employers gave her the opportunity to continue her literary journey. She holds a Bachelor of Science in Computer Science. She had previously worked as an assembler, operator, marketing assistant and accounting clerk in the Philippines. She is an avid reader and an avid student of literature. She said, “I carefully studied the literary styles of various writers, and my works were edited and polished by my mentors.”

Castillo said she had no plans to change jobs after the book’s release. “I value loyalty and gratitude to my employers,” she said.

Castillo also serves as a volunteer editor and proofreader to help aspiring writers get their work published.

She is now busy working on her next literary project – OFW Diaries – a compilation of short stories written for Overseas Filipino Workers (OFW).