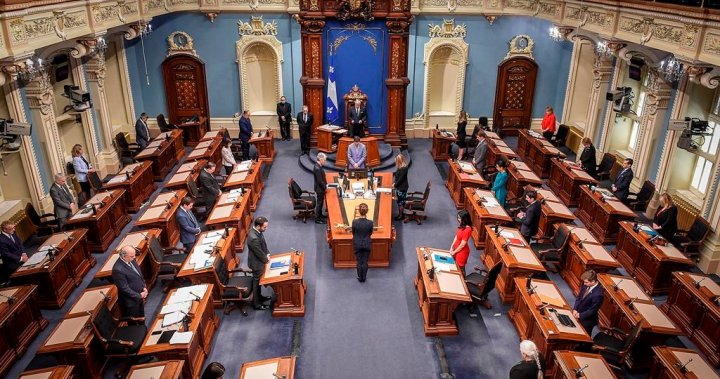 The Quebec legislature will soon be accessible only to people fully vaccinated against COVID-19.

The National Assembly announced Thursday evening the new health decree requiring vaccine passports for staff, visitors and journalists, after a heated debate between the parties.

The rule, as drafted, applies to “political staff, administrative staff of the National Assembly, members of the press gallery and visitors” – but does not specifically mention politicians.

READ MORE: Quebec’s overhaul of its strict French language law under the microscope during hearings on Bill 96

The ruling Coalition Avenir Québec (CAQ) party as well as the opposition Liberals voted in favor of the vaccination passport requirement, arguing that the legislature should set an example for the rest of the population in terms of vaccination.

Speaking Thursday, the Minister of Health Christian Dubé criticized the parties opposed to the measure by declaring: “I do not understand why parliamentarians do not want to set an example for Quebecers.

Québec solidaire and the Parti Québécois, the third and fourth parties in the Legislative Assembly, opposed the measure because the Department of Public Health did not recommend it.

Paul St-Pierre Plamondon, the leader of the Parti Québécois, said Thursday that a vaccination passport is supposed to be reserved for non-essential activities – and that parliamentary democracy does not fall into that category.

The vaccination passport requirement is expected to come into effect later in October. The rule will require political staff, legislative staff, journalists and visitors to present identification as well as proof that they have been properly vaccinated against COVID-19 in order to access the legislature.

In a telephone interview, constitutional lawyer Julius Gray said it would have been problematic if the rule specifically targeted members of the legislature. He said any provision that effectively prevents unvaccinated people from holding office would potentially violate section 3 of the Charter of Rights and Freedoms, which guarantees democratic rights.

He pointed out that a Superior Court judge earlier this year struck down part of Quebec’s secularism law that prohibited MPs from wearing face covers, ruling that it would prevent a person wearing one from sitting. in the National Assembly, even if it was democratically elected.

“The House can decide which visitors come in and which don’t, but with regard to elected officials, under Article 3 of the charter, you cannot prevent elected officials from entering,” Gray said during a telephone interview.

Gray said vaccine passports, originally designed to access non-essential services such as bars and gyms, are being implemented under an increasingly broad set of circumstances, reflecting the fact that ” society is losing patience “with those who are not vaccinated.

And while he is a strong supporter of vaccines and believes passports may be legal for non-essential activities, he said it was important to ensure that the system was not extended to the point of violating regulations. fundamental rights.

“We look at each (situation) as it arises, but as a rule, if society loses patience and denies people their rights, turns them into outcasts, I think there is a problem. “, did he declare.

2:02
Legault refuses to make Truth and Reconciliation a public holiday in Quebec