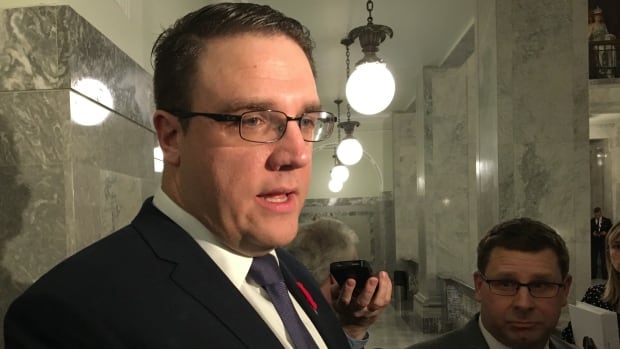 Alberta Government House Leader Jason Nixon is facing intimidation charges following a heated exchange in the house that saw him swear at the president.

On Wednesday, Independent MP Todd Loewen called on Speaker Nathan Cooper to sanction Nixon, saying Nixon had tried to intimidate him into not carrying on with his job – a fundamental violation of his rights as a parliamentarian.

“This legislature is not a one-man show and, no, it is not about a small group of people who think this is their personal playground that they can manipulate,” Loewen told Cooper in the legislative chamber.

The exchange took place three weeks ago, when Loewen presented documents for the legislature’s brief and, in doing so, publicly accused Nixon of making false statements about her.

This caused Nixon to yell back, and when Cooper intervened, Nixon directed a profane word so loudly in Cooper’s direction that it was recorded in the written parliamentary record.

Nixon then told the House that he could change the rules to prevent or limit the filing of documents, which Loewen said is grounds for intimidation.

“It has affected me and all members who are now worried about tabling paperwork in case the House leader finds another personal offense and actually makes changes stopping this important part of members’ business,” said Loewen.

“The words of the Government House Leader had a very chilling effect,” Gray told Cooper.

“By his action he not only violated the privilege of [Loewen] but has offended the whole congregation.”

Nixon was not in the house and his case was argued by Deputy Prime Minister Joseph Schow.

Schow said Nixon responded to Loewen’s provocative, unwarranted and spurious accusations. He said Loewen was breaking the rules by making “swipes at the wheel” with his comments and that Nixon, and anyone else in the house, was free to suggest changes to make things smoother.

“This government caucus is always looking to find ways to improve the management of assembly business and prevent abusive behavior,” Schow told Cooper.

“The Government House Leader did not threaten any member of the assembly.”

There is a recent history of disagreement between Loewen and the United Conservative Party government.

Loewen was elected to cabinet in the 2019 election but was kicked out of caucus nearly a year ago for questioning Prime Minister Jason Kenney’s leadership and publicly urging Kenney to resign. He now sits as an independent.

During the March 31 debate, just before the House adjourned for an extended two-week recess, Loewen was filing papers to underscore his criticism of Kenney. He also wanted to refute Nixon’s accusations that Loewen was an NDP sympathizer and advocated for mandatory COVID-19 vaccinations.

This prompted Nixon to yell at Loewen through the floor.

When Cooper intervened, Nixon turned to Cooper and said, “Mr. President, that guy just called me a liar in the middle of this fucking Parliament.”

This caused Cooper to stand up and loudly reprimand Nixon.

“The use of unparliamentary language, including an F-bomb directed at the president, is extremely inappropriate,” Cooper said.

Cooper asked Nixon to apologize for profanity and using Loewen’s proper name in the legislature — another procedural no-no — when Nixon told Loewen during the exchange, “What a joke. C That’s why your career is over, Todd.”

Loewen, under Cooper, apologized for accusing Nixon of misleading the assembly.

Cooper said he would issue a decision on Loewen’s complaint in the coming days.

Minister calls for end to ‘clean money’ threat to cars